Park Guell in Barcelona – Another masterpiece by Gaudi!

Half a century before the first Disneyland in the world built (1955), Gaudi had already envisioned a themed park experience – Park Guell.

Designed by Antoni Gaudi, Park Güell was a project that took 14 years to be constructed, beginning in 1900. Which means, more than 100 years ago from now, Gaudi already had this park’s vision, for Barcelona visitors.

The difference is, Park Guell was originally intended to be private property for rich people. That didn’t take off according to plans, somehow. In 1922, the City Council purchased Park Güell and opened it as a municipal park in 1926.

Park Güell is such an artistic park!

A colorful, creative and artistic place, it became a UNESCO World Heritage Site in 1984. Park Güell offers impressive vantage points with splendid views of the sea and the Plain of Barcelona. You need to see it!

Did you know that? I didn’t! The 4 themes were meant to be experienced progressively. If only I knew it before visiting! It would have made the visit much more dimensional!

Official websites refer to the two pavilions at the entrance as the porter’s lodge. All I could think of was gingerbread houses, yummy! According to an article posted by Viewport Magazine, Gaudi had watched Hansel and Gretel recently when he was designing the park. You can see it definitely had an influence on him!

Both structures have stunning roofs, built with traditional clay tiles that were covered with trencadis. Trencadis refers to a decorative kind of mosaic made using tile shards, which you will see is a significant decorative element of Park Güell. 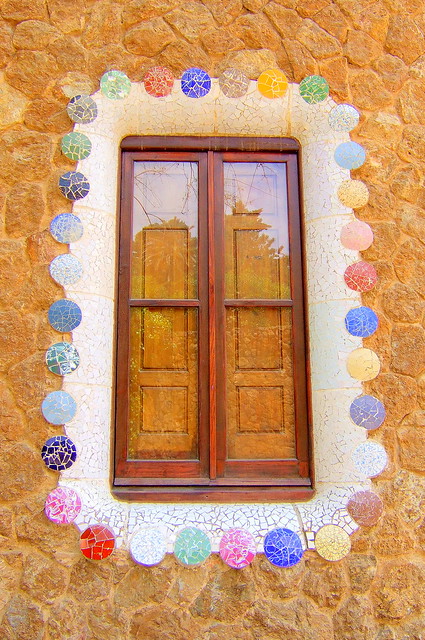 From the main entrance, you’ll climb up the grand stairway. Near the top of the stairs, a dragon / salamander mosaic statue – just like the dragon python from Greek mythology – stands guard over a fountain. This statue here is extremely popular. Good luck trying to get a photo with it without other tourists appearing inside your photo! You’ll also see this figure being featured in postcards and paintings at souvenir shops in Barcelona.

At the top of the stairs is a designed space (temple) with almost a hundred Doric columns.

“Hypostyle Room supports half of the Placa de la Natura (Nature Park) on eighty-six columns made from site rubble. Each of the columns coincides with one of the intersections of the sferical domes that allow rain water to be collected from the upper square and carried inside the columns to the reservoir located under the room.

Gaudi removed four columns, two consecutive ones along the central axis and another two to the left and right. At the points where the columns were removed, four prefabricated medallions of 2.4 metres diameter each were placed. They span the entire space between the four adjacent domes, are clad with trencadis and were made by the architect Josep Maria Jujol.”

(above quoted information was from a banner at Park Guell)

The Hypostyle Room was meant to be the market for the private estate. Look upwards when you’re there because you will discover surprises of art that Gaudi had incorporated into the ceiling!

Partly dug into the mountain and partly held up by the Hypostyle Room, this open plaza once held all kinds of celebrations. Surrounding the edge of this open area is a continuous bench that is world-famous. Salvador Dalí had referred to the bench as the precursor of surrealism.

This continuous bench is decorated with beautiful trencadis – sometimes arranged purposefully, sometimes what appears to be random patterns. True to Gaudi’s thoughtfulness, the bench is ergonomic – he had a workman sit in soft plaster so he could recreate the anatomical curve accurately. It was very comfortable sitting on the bench!

It was also at this plaza where we noticed a guy walking around with very ‘unique’ jeans – the jeans were cut off where the buttcheeks were at 😂. He was escorted off by the police lololl.

The next area you’ll explore consists of whimsical pathways, porticos, and columns that appear to be growing out of the earth. Play spaces were created from the creative blending of architectural features as well as the area’s natural aspects.

Unfortunately, I cannot write on the last theme as I have no memory of this area of the park at all?!? The landscape is supposed to be more rugged, the incline turns steeper. I probably left through a different exit as there’re different entry & exit points at Park Güell.

For the last theme of Park Guell, Gaudi had intended the path’s visitor to feel as if one is on a religious pilgrimage. What an experience it would be!

A post shared by Kristine🌟Petite Wanderess (@thepetitewanderess) on Feb 6, 2017 at 10:05pm PST

Do you feel like seeing Gaudi’s Park Guell with your own eyes?

Visiting Spain? Check out these posts!

All other photos featured in this post belong to me.